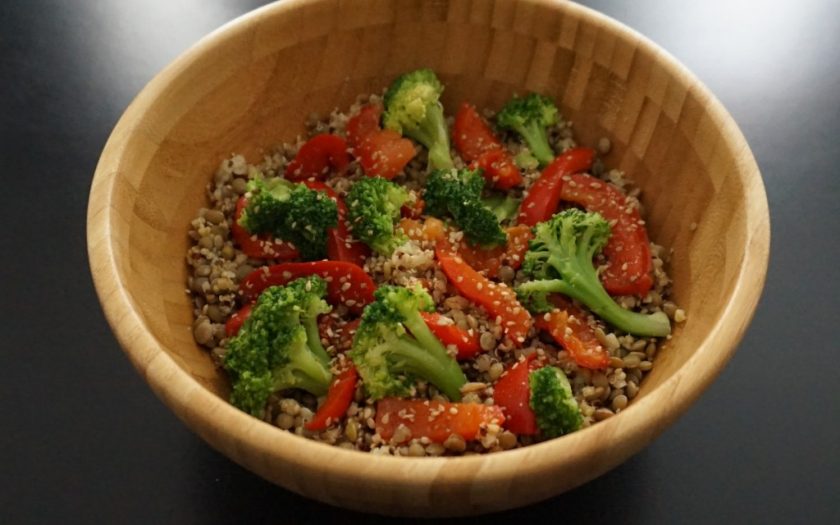 Iron is a trace element fairly well known to the general public, but few can describe its role and the dangers associated with its deficiency. Its popularity is mainly explained by the fact that iron is on the top step of the podium of the most widespread deficiencies in the world. And it is especially women who risk iron deficiency anemia (lack of iron) following heavy periods, or athletes who neglect their diet.

The consequences can be various: feelings of cold, decrease in physical and intellectual performance, hair loss… So why is it important to consume it, and which foods are richest in iron in a vegetarian / vegan sports food?

Iron plays a vital role as it is used in the manufacture of red blood cells and helps transport oxygen throughout the body. The iron (contained in hemoglobin) will take charge of oxygen in the lungs to supply and operate organs and muscles.

The color of the veal is white while that of its mother is red, and it is no accident. This is the consequence of anemia produced on purpose by humans.

The calf is fed a breast milk substitute with a much lower iron content so that its muscles receive less hemoglobin and take on that white color that consumers are accustomed to. This deficiency would lead to stunted growth, deviant behavior and probably other consequences in the calf.

We understand then that iron deficiency is very harmful for the athlete, while stable levels will be beneficial for the same reasons as a balanced diet in zinc .

Iron has a direct impact on muscle gain and strength, since oxygen is part of the energy resources necessary for muscle contraction. Even if oxygen is partially used during sessions devoted to power take-off (anaerobic system), it is still necessary for the resynthesis of energy during the recovery times between two series .

Iron will also allow fat loss because oxygen is necessary for the performance of physical activity involving the use of fat as a source of energy. No iron, no ability to withstand the effort and therefore lose fat.

For the same reasons as above, iron and its action on oxygen will play a role a considerable role in improving physical performance. This will be the case for bodybuilding and even more for endurance sports.

We are talking about iron needs increased by 70% for runners. It is always good to remember that the official recommendations (around 10mg / day for men and 20mg for women) must be revised upwards for athletes and pregnant women.

To reduce muscle aches, cramps and be in better shape

To avoid cramps, over and over again the same song, oxygen is needed, and therefore iron. Indeed, if the effort is intense and prolonged, the muscle cells are made to lack oxygen and an accumulation of lactic acid follows which may continue with a cramp.

The best sources of iron for a vegetarian / vegan athlete

It is important to understand the distinction between the two kinds of iron that exist: heme iron and non-heme iron. Heme iron is the same as that mentioned above and which is present in hemoglobin and myoglobin, therefore in foods of animal origin.

As for non-heme iron, it is the iron found in all other foods. Thus, vegetarians will find it in dairy products and eggs, and vegan in plants. Heme iron is more digestible than non-heme iron, but don’t panic.

Numerous studies prove that vegetarians and vegans do not suffer from any iron deficiency, except in cases of unbalanced diet or special cases (pregnant women for example).

Also, if you are a vegetarian or vegan, you normally absorb iron more efficiently than an omnivore. Indeed, it seems that the body can adapt to the sources of iron that it provides and compensates for the lack of animal iron by a better assimilation of vegetable iron. There would be a period of adaptation that would last longer or shorter depending on each individual.

The best sources of iron

Algae are very good sources of iron. Among the most interesting, we find spirulina , kombu, dulse, nori and wakame seaweed.

Brewer’s yeast is rich in iron, vitamins and trace elements.

Cocoa is also an interesting source of iron. It should preferably be chosen as a 100% cocoa raw product, unsweetened, such as Van Houten .

Seeds of sesame , poppy , amaranth and lin also allow you to add iron, to be incorporated without moderation in salads.

Legumes and grains : lentils , quinoa , millet , white beans and chickpeas are preferred, and if possible with soaking and sprouting for cereals.

Eggs and dairy products do not have high iron levels, so it will be better to look to the sources listed above if you are a vegetarian. It should also be understood that we can considerably increase or decrease the assimilation of iron contained in these foods, it will depend on how you consume them and the foods with which you associate them.

– By practicing fermentation, soaking and germination.

– By consuming meals with tea, whose tannins decrease iron absorption. It seems that waiting 40 minutes between a meal and drinking the tea would prevent this from happening.

– By consuming too much dairy products : calcium would also be a component that would reduce the iron level.

So it is not difficult to eat a diet that is free from iron deficiency. By concentrating on the most interesting foods, if possible soaked and sprouted when possible, and by taking into account that vitamin C is to be combined and tea to dissociate, you can easily reach the recommended daily intake of iron by being a vegetarian or vegan athlete.

And you, have you adopted these habits on a daily basis? You can also take a look at the Facebook page and the TreeningLife Instagram account for examples of dishes. sporty and balanced!